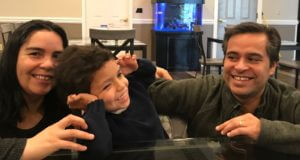 Meet Tomas! Diagnosed With Bilateral Retinoblastoma At Two Months Old, Tomas Has Already Lost One Eye To The Disease. His Family Continues To Travel From Chile To Philadelphia, Hoping That Treatments At Wills Eye Hospital Can Save His Eyesight And His Life.

When Rodrigo and Maria first brought Tomas to the region for a second medical opinion, his family persevered and stayed positive. Having tried several unsuccessful treatments in their native Chile, including laser therapy and traditional chemotherapy, they made the decision to travel to the Philadelphia region for any possible solution. At Wills Eye Hospital, they discovered promising new options, including intra-arterial chemotherapy and brachytherapy, during which a small amount of radioactive material is placed on the outside of the part of the eyeball where the tumor is and stays there for several days. 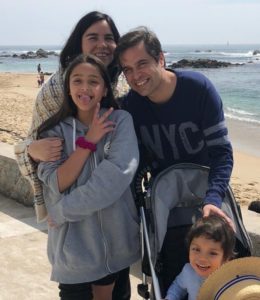 Originally, they stayed with a friend in the Philadelphia suburbs. After a referral from the hospital, RMHSNJ staff contacted them but the family was reluctant to move into a new space, afraid of alienating the friend who was helping them navigate this country and understand the language. However, after commuting into the city for a 5:30 am appointment, waiting in the open winter air for a train, and examining their financial situation, they decided that RMHSNJ would be the best option for them. The House provided the family with convenient rides to and from the hospital, a welcoming network of new friends, nourishing meals and, most importantly, a home where the whole family – Rodrigo, Maria, daughter Josefa, and Tomas – could be together. Here, they didn’t have to worry about anything except Tomas’ health.

Fighting this aggressive cancer for the past three years, the family has returned to the House five times for Tomas’s treatment and check-ups, with each stay averaging about two months. Without the support of family, friends, Rodrigo’s employer, and RHMSNJ, they know that they would not have been able to give Tomas his best chance at saving his eyesight.