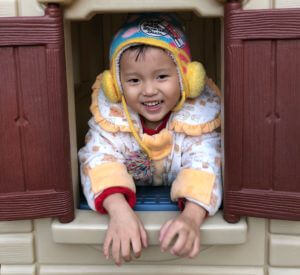 Meet Lanxin (CiCi), A Two-Year-Old From Guangzhou, China Who Loves Playing, Laughing, And Doing All The Things That Every Other Two-Year-Old Loves To Do!

In June of 2018, CiCi’s parents noticed a difference in one of her eyes. They took her to a local hospital in China where she was diagnosed with Retinoblastoma, a cancer of the eye. The doctor told CiCi’s parents that the only option was to remove her eye. Concerned, they searched for a second opinion.

CiCi’s parents began speaking to other families whose children had similar medical diagnoses. These families urged them to research doctors and hospitals in the United States, such as Wills Eye in Philadelphia. Her parents scheduled an appointment and flew out to America. They did not know where they would be living, how they would communicate, how to exchange cash, or what would come from this trip. CiCi’s mother described this as a “sad and scary time.”

Through family connections, they learned about Ronald McDonald House. When they received the phone call confirming that a room was available at RMHSNJ, they felt a huge sense of relief.

CiCi and her family have stayed at RMHSNJ on three occasions for more than a total of 120 nights. Her treatment initially required a five-month stay and she has had two follow-up treatments.

Currently, CiCi’s condition is stable and she will not need to return for an entire year! Her family is very happy and says they love staying at RMHSNJ and are extremely appreciative of the volunteers and staff that play a role in making Ronald House their home-away-from-home. They have enjoyed learning about American customs and holidays. CiCi’s favorite room at RMHSNJ is the Sesame Street bedroom because she loves Elmo! She also loves to pose for pictures with the Ronald statue outside. She’ll ask her parents, “Are we going to McDonald’s (Ronald McDonald House)? I love Ronald!”