Sadie has been our miracle baby since before she was even born. Having tried for years our little bundle of joy was finally coming. Little did we know she was coming even sooner than planned. At only 24 weeks gestation, weighing only

1-1/2 pounds and just over a foot long, Sadie came into this world. We had been warned about the “roller coaster” that the first few months of a micro-preemie's life would be but nothing could have prepared us for the next 99 days. Ventilators, blood work, transfusions, and a bunch of close calls were all we could focus on during this time. We used the Ronald McDonald Family Room outside the Cooper NICU every day. The room became our oasis for months while  Sadie was in the NICU. 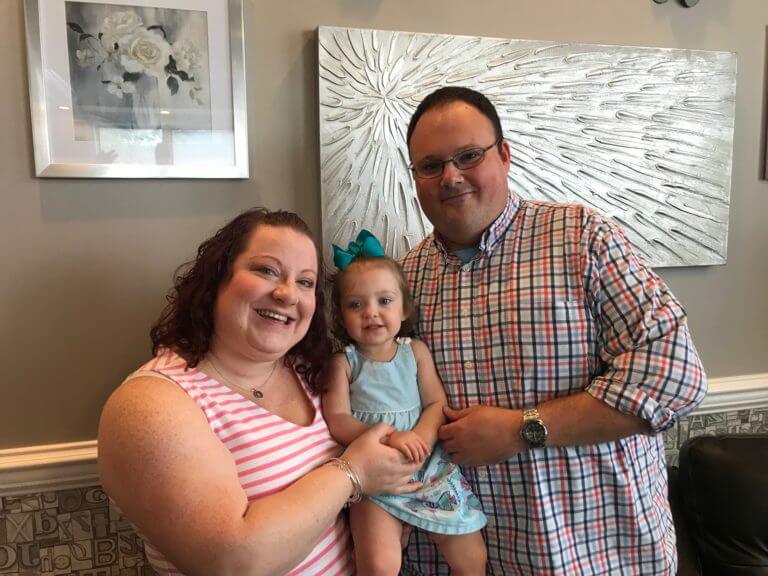 Since no one but my husband and I were allowed in the NICU for infection precautions, that meant I was alone in the NICU most days of the week. The RMH room became the place where family and friends could come and visit, sit with me, have a meal with me, and be as close to Sadie as they could. My mom would sit in the room for hours and cross-stitch or work on her laptop while I was with Sadie. It was the closest she could get to her first grandchild for the first 100 days of Sadie’s life. But, having that room for her, was her way of being there and being with Sadie even when she couldn’t be. And on the days when my husband and I needed to decompress/celebrate/cry/vent, whatever the day's events called for, that was where we could always go to do it. Even now, when we bring Sadie back to visit her nurses and show them how amazing she is doing, we all gather in that same room.

Besides being a meeting place for family and a private sanctuary, the RMH room also provided a place where I could meet and decompress with others going through the same experiences that I was. I would often meet other moms; some farther along in their child’s journey and some just beginning theirs. As nice as it was to have family and friends visit, talking with someone who truly understands how you are feeling was so helpful. One mom who I met there happens to live one town over from us. We still get together now for play dates with our little miracles. We were in different pods in the NICU at opposite ends of the unit. Our paths would probably have never crossed if we hadn’t had a place like the RMH room. Now, it is our pleasure to try and give back to Ronald McDonald House, so that other families may have a similar experience that, hopefully, they find somewhat comforting.